Blog | New Hope on the Horizon? The Belgrade-Pristina Dialogue and the European Union's Struggle Towards a Diplomatic Victory

In her blog, our intern Barbora Volkova discusses the new Franco-German proposal regarding the Kosovo-Serbia disputes. She analyses what this initiative entails and what relevance it may have for the accession negotiations within the European Union.

Blog | A drop of leftwing in a sea of rightwing? The Brazilian elections

As the world eagerly awaits the outcomes of Brazilian elections, which will have strong impacts on the future of the Amazon and global climate efforts, our intern, Benedetta Milani, breaks down the status quo as Brazil determines its political future tomorrow.

Jakub Ferenčík has written a blog on German dependence on Russian gas. In his post he discusses how the German government's initially positive intention to tie Russia to Europe through economic intergation for political stability has backfired and resulted in the opposite. It mentions the role of former Chancellor Gerhard Schröder, who contributed significantly to Germany's dependence on Russian supplies, and the circumstances surrounding the construction of the Nord Stream 2 pipeline. The second part analyses the legacy of former Chancellor Merkel and her failure to perceive Russian expansionist tendencies.

Tatiana Mindeková, our project manager and junior researcher, wrote a blog named “How do Czech and Slovak governmental parties perceive the EU Green Deal? Online monitoring of Facebook posts”. In this blog, Tatiana analysed approaches of Czech and Slovak parliamentary parties to the European Green Deal and identified whether the parties and their representatives are supportive or critical towards it.

Registration for the third year of the FLEET project is open!

Aktuálně.cz | Who will feed the hunger for electric cars - us or China?

Our research fellow Michal Hrubý is the co-author of a blog dealing with a currently much discussed topic - electromobility. In this article, the authors ask a fundamental question. What cars are now worth producing in the Czech car industry so that we don't cry over the profits?

Jakub Ferenčík wrote a blog on the current topic: The Sixth Sanctions Package & the Visegrad Group’s Reliance on Putin’s Gas. Russia's aggression in Ukraine has necessitated another package of sanctions, this time in the energy sector. Due to the lack of alternatives for gas supplies, the Visegrad Four countries had a problem with the implementation of the latest sanctions package. In the end, the EU found a consensus and introduced exemptions for the Czech Republic, Slovakia and Hungary. 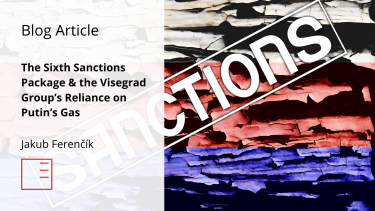 Jakub Ferenčík wrote a blog on the topic: The Militarization of Europe: Three Reasons the EU’s Defense Strategy Changed. In his blog, he writes for example about three reasons why the EU defence strategy has changed or the militarisation of Europe and the future of deterrence.

Esteban Gas has written a blog about the French elections that took place during the French presidency. While Macron’s re-election at a glance enables another term of continuation of the existing French agenda in the Union, the tightening of the gap between the far-right and Macron will have to be acknowledged politically in the years to come and might affect the EU.

Blog: In tandem with COVID - 19, other, less visible, mental health crises are on the rise.

Michaela Stanová has written a blog in which she discusses how the COVID-19 pandemic has affected the mental health of us all. She argues the emergence of COVID-19 has caused not only an increase in, but also an worsening of, pre-existing mental health problems, but fortunately also an interest in addressing them. This is both at the individual level and at the legislative level.