Policy Paper: China vs. US: The Green Energy Race

In her policy paper, Katharine Klačanský, Research Fellow at EUROPEUM Institute for European Policy, discusses the role of climate in geopolitics and provides an overview of the Chinese and American green investment plan and its implications for the future of fossil fuels. 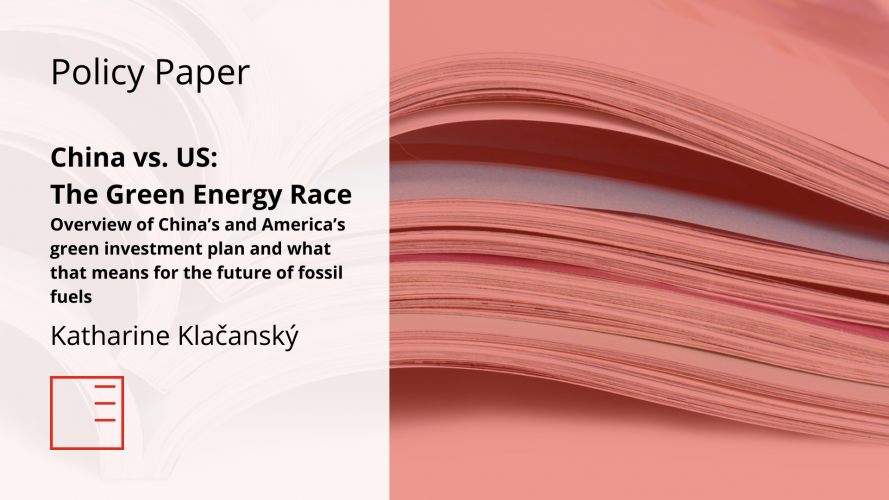 The role of climate change in geopolitics has changed significantly in the last decade. The climate topic has shifted the geopolitical winds towards a complete restructuring of the future global economy. Today, a multilateral order is being challenged with a new era of green-energy competition spanning over greater geographic and economic spheres, driven by rapid technological change and advancements. Energy security and technological developments in renewables will determine who will become global leaders, awarding them with competitive and strategic economic advantages. Renewable energy programs and policies in China and the United States have rapidly increased in a short period of time. Facing the rapid global expansion of China’s energy-sphere of influence, the United States began competing with China by offering affordable finance for global clean energy development in lieu of fossil fuels. By financing more clean energy projects, the United States would contribute to meeting the goals of the 2015 Paris Agreement on Climate Change and provide a counterweight to China’s energy investments around the globe.

This paper calls on global renewable energy leaders such as China and the United States to collaborate more closely by building a competitive sustainable energy platform, along with its global partners such as the European Union. By sharing information, costs, and efforts, it would possibly accelerate technological advancements towards more renewables and climate-friendly policies. The idea is for governments to create an environment in which companies can compete to produce more renewable technologies. China is realizing quickly that if governments increase their efforts, especially by supporting research and development, this is likely the key to winning the “green-energy race”. Better yet, increased technology cooperation and competition between countries and their respective companies, could help motivate and engage other countries into action as well and ultimately mitigate greenhouse gas emissions.

The whole article is available under the PDF button.