This Thursday, on December 3, Denmark will have a referendum on whether to replace Denmark's current opt-out option of the EU's Justice and Home Affairs (JHA) with an opt-in model or not. 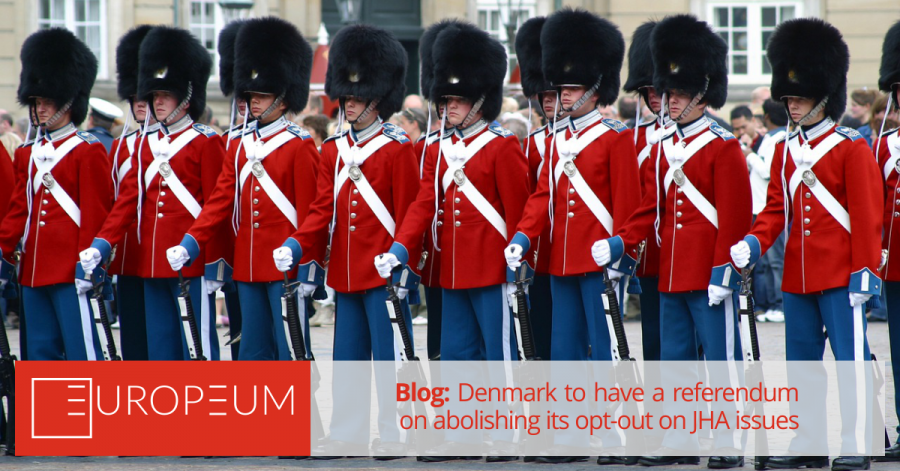 The referendum has been prompted by the current minority government, the smallest in 40 years holding only 34 seats in the 179 seat parliament, who is concerned that Denmark will have to leave Europol otherwise, which Denmark joined in 1993. In the Lisbon Treaty of 2009, Europol went from an intergovernmental cooperation to a supranational cooperation. When this regulation enters into force, the foundation for the Danish opt-out fundamentally changes and becomes incompatible with Europol, thus necessitating the referendum.

The JHA opt-out is part of four opt-outs granted to Denmark in 1993 in the Edinburgh Agreement after Danish voters initially rejected ratifying the Maastricht Treaty. These opt-outs concern the euro, on which one referendum was already held and rejected in 2000; the CSDP, on which a referendum may eventually be held in the future though no date has been given so far; the citizenship opt-out, and, finally, the JHA opt-out, which will be subject to the December 3 referendum as the Lisbon Treaty of 2009 enabled Denmark to change its JHA opt-out to an opt-in option on a case by case basis, should the political will to do so manifest.

If the referendum succeeds, Denmark will immediately opt into 22 JHA legislative acts of which 7 pertain to criminal law and transnational police cooperation, and the remaining 15 apply to civil, family, and commercial law. In practice, the 22 acts will improve areas such as fighting transnational crime to recovering debt from foreign companies and citizens on behalf of Danish citizens (and vice-versa).

The crux of this uncertainty and indecision stems from the uncertainty of what precedence either choice will set for the future. Agreeing to the opt-in mechanism will enable Denmark to flexibly decide whether to opt-into legislation from the beginning in order to obtain influence in its negotiations, or renounce influence in order to await its impact and results, and later, should the will to do so manifest, opt into it.

While this flexibility is a strength, the naysayers remark on the fact that the opt-in will potentially lead to a loss of sovereignty to the EU and the Danish electorate. The opt-in will in lieu of the opt-out enable a narrow majority in the 29 seats Danish European Affairs Committee to pass legislation that theoretically could encompass surrender of sovereignty instead of the current majority needed in the 179-seat large Parliament. Corollary to this, the naysayers remark that while the upcoming referendum only pertains to 22 judicial acts, it also establishes precedence for any future EU legal policy drafts, meaning that although the referendum only directly pertains to the aforementioned 22 acts, it is not only limited to these. Moreover, the opt-in mechanism will make it impossible to discard supranational legislation even if popular or political will to do so should materialize. Instead of the opt-in, the naysayers favor maintaining the opt-out agreement, instead striving to obtain similar results through parallel agreements.

While no choice is inherently superior to the other and both have pros and cons, the naysayers' cornerstone argument that parallel agreements can conjure the same results as the opt-in while maintaining the autonomy provided by the opt-out is fundamentally flawed. The will within the EU to favor Denmark with parallel agreements is not a given, and in the past it has taken Denmark on average five years to establish parallel agreements. Five years outside Europol is a long time given the current security predicaments within Europe. Coupled with the fact that Europol is not the only agency that Denmark might be forced to leave (CEPOL, the European Police College, is undergoing similar changes, just to name one), voting against the abolition of the current opt-out mechanism may prove costly to Denmark long-term both in terms of security as well as in terms of influence within the EU.

Flawed arguments aside, relinquishing sovereignty is a legitimate concern for any nation, even if it increases opportunities for influence, and Denmark, though generally very pro-European, are traditionally sceptic when it comes to deepening EU integration. However, at a time where European unity and cooperation is increasingly pertinent in terms of security, the sensible hope from a European perspective is that Denmark decides to abolish the opt-out mechanism obtained in 1993. If Denmark decides not to, it will sideline Denmark in Europe on matters falling within the purview of Europol. While the actual impact of a no vote is not likely to impact the EU severely, it is yet another example of a widening rift between Brussels and the EU member state populations in a time when unity would be preferable.